Last Sunday’s episode of The Walking Dead was probably one of my favourites. I love how they included everyone’s story (except Rick,Michonne,Carl) and it all fit into the 48-minute timeframe. The biggest question coming out of the mid-season finale was what’s going to happen to everyone and if baby Judith was alive. For now, it seems like everyone is okay- even da baby (wasn’t too worried about that one). Even Carol is brought back when she finds her adoptive girls and meets up with Tyreese. She made her way back to the prison right after the showdown with The Governor, she saw Tyreese and the girls run into the forest so she caught up with them. It’s a good thing she came when she did because Ty was stuck with baby J and the two girls. There’s no way he could’ve protected them all. 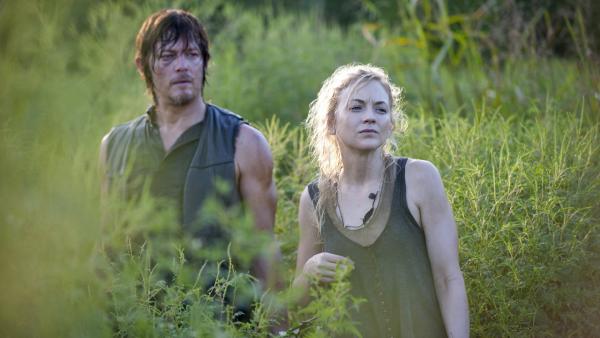 It seems like the second half of this season is going to be a wild ride. We needed the Governor to shake up things and make the show more interesting. The episode ended off with Tara and Glenn fighting off a swarm of zombies, Glenn collapses to the ground and faints (or is he just sick again?). Tara turns around and there’s a huge army tank behind her with some dudes dressed up in army gear standing there. One of them says to her, “You gotta damn mouth on you, you know that? What else you got?”

Don’t let the picture fool ya. This dudebud might be working for the good side.

I haven’t read the comic books so I don’t know if these people are good or bad. I think the fact that we just finished off with The Governor might mean we’re going to meet some really nice people for a change. I could be wrong. What do you guys think?

HEROINE of the Month